OpenComputers provides floppy disks that can be crafted (but not found as loot, such as in dungeon chests). Most notably, the OpenOS floppy disk is a loot disk from which one can install OpenOS.

Originally these disks were found as loot, such as in dungeon chests. But for many versions the only way to obtain these floppy disks has been to craft them. You can craft any loot disk by placing a Scrench and any loot disk in a crafting table and cycle to the next. Repeat the process to craft the next loot disk. The order is unspecified.

Showcased here is the OpenOS loot disk. The other loot disks look similar; they have different coloring and have their loot disk name printed on the disk image. 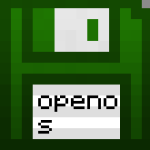 When floppy disks are inserted into computers their filesystems are automounted and the user can browse the files at will.

However, it is anticipated that a user will want to run the programs provided by loot disks as a natural part of their systems, i.e. they will want to install them. Thus in the explanation of these loot disks, it is omitted and assumed the user runs install after inserting a disk into their computer.